In my last post I spent some time (and many words) describing the what, how, and why behind some of the changes Apple has made to the Facetime protocol over the past three years.

Needless to say I was impressed.  There were several things those of us in the open source world can learn from that analysis:

- SIP, STUN, RTP, RTCP port multiplexing (while not including the a=rtcp-mux attribute)

The IETF is currently working on port multiplexing (mainly via WebRTC) but I have yet to see a proposal that includes multiplexing signaling and media on the same port (with the architecture of WebRTC that's not a surprise).  Either way I'll consider this "in progress".  I guess there's always IAX ;).

Compact SIP headers are already supported by a variety of open source applications.  We'll consider this one done.

SDP minimization is something that can't generally be done in a standards compliant way.  You'll note I labelled these optimizations as a "slight protocol violation" in my previous post.  We'll table this one for now.

SDP compression, however, is very interesting.  SIP bares more than a resemblance to HTTP and HTTP compression has been standard and well supported for quite some time.  With that in mind I see no reason why it can't become more widely supported for SIP applications as well.  It's also important to point out that while I'm calling this "SDP compression" it's really SIP body compression that could be used for any MIME type or combinations of MIME type (multipart).

As we saw from my last post this is no easy task.  The parsing of plaintext SDPs is so easy and commonplace today that anything else is a significant undertaking.  For compressed SIP bodies to be transparent to me in my everyday life they would need to be supported in at least the following projects/products:

Fortunately I have good news!  Shortly after my last post Daniel-Constantin Mierla from Kamailio contacted me and let me know that he had written the gzcompress module for "the fun of a quick coding in the evening".  There's still work to be done on this module but this was an awesome (and unexpected) start!

In the same day I was also contacted by ashdnazg from the Pyreshark project.  First of all, for a protocol junky like myself the ability to write Wireshark protocol dissectors on the fly in Python is very, very exciting.  I can't believe I hadn't heard of this project before!  Anyway, within hours of receiving the Facetime packet capture ashdnazg was able to provide me with a Pyreshark-based Wireshark dissector (in 26 lines of Python, no less)!  My local (Ubuntu) instance of Wireshark now looks like this when loading a Facetime packet capture: 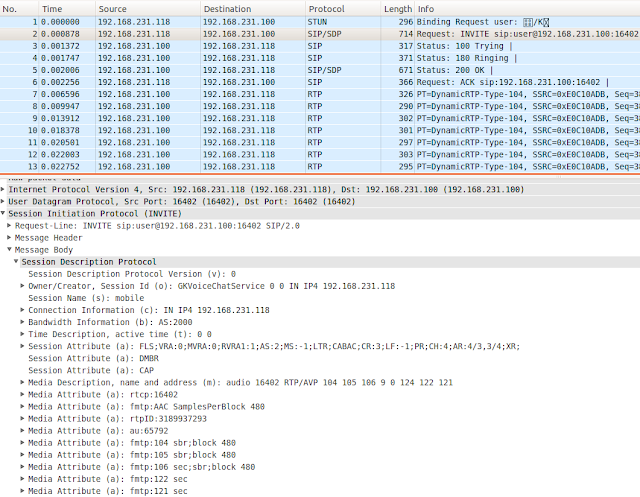 This is another marvel of open source - within 24 hours of my last post the leaders of two open source projects from across the globe were able to collaborate with me to support the functionality I described here.  Amazing.

Of course we're not done yet.  I created a bounty for FreeSWITCH to support this functionality as well.  Anthony and the boys are very busy but we'll see if I can get any traction on this one.

That leaves PJSIP and HOMER.  Seeing as HOMER is based on Kamailio it's probably not that difficult to implement this.  I'd also like to think (based on the use case and project goals) that they may be more interested in this than anyone.

HOMER team is listening :)
We already support compression in our HEP capture agent and in our trunk. We'll float this up the list.